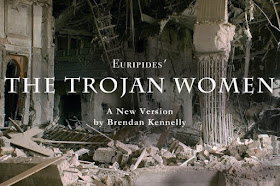 Rachel Dart brings her new interpretation of Euripdes’ “The Trojan Women” to the Balcony Theater at West Park with a new version by Brendan Kennelly. The issue at hand is how will the women of Troy survive following the defeat of Troy by the Greeks. The text in powerful and passionate language describes the fate of women in wartime. It is profoundly disturbing to hear how contemporary the descriptions sound. Equally disturbing is the fact that though these words relate to a war time situation, the idea of women as “prizes” and their experience of men could equally relate to what we are learning about the experiences of women at the hands of Harvey Weinstein …and others…in the Hollywood establishment. (Which we know is not limited to Hollywood…it’s a cultural problem from the President on…).

The one complex…and perhaps confusing…aspect of a profoundly feminist production is how we are to understand the conflict between Hecuba and Helen who and what Helen is in the story. Another victim? A manipulative agent who brings destruction to others? Some combination  or neither or just ambiguous? It’s a credit to the production…and the actors…that we are drawn into the story and left to reflect on these characters.

Ms. Dart’s cast is uniformly strong though Marcie Henderson as Hecuba and Ashley Burroughs  as Helen are especially strong. Givereny Petitmermet is deeply moving in the wrenchingly tragic role of Andromache and Erika Grob as Cassandra and  Joie Bauer as Poseidon and Sam Leichter’s Talthybius are all worthy of mention.

As part of their mission as a  company, The  New Collectives has scheduled conversations following Thursday performances with a wide variety of social and political groups  that clearly fit with the Center at West Park’s mission to be a place to explore the intersection between beauty and justice, ethics and esthetics.

Like last year’s Noche Flamenca production of Antigona, this production of classic Greek drama once again shows the continuing relevance of these plays to our unerstanding of the human condition. Euripedes’ The Trojan Women is worth a new look…thanks to Rachel Dart and New Collectives…and West Park…for giving us that look.